Despite several high profile incidents recently, a new survey of the container shipping industry by the World Shipping Council (WSC) reports that the incidents of containers lost overboard has been on the decline and is a small percentage of the total annual volume. The WSC also outlines a number of initiatives to further enhance container safety.

Containers lost overboard represent less than one-thousandth of one percent of the roughly 226 million containers transporting $4 trillion in cargo currently shipped each year according to the WSC. Looking at data for the past 12 years contributed by shippers that represent approximately 80 percent of the industry, and extrapolating it to represent all shipping, the WSC reports that the three-year moving average is declining, halved to an average annual loss of 779 containers lost overboard between 2017 and 2019.

The WSC concludes based on data from the past 12 years that half of all containers lost at sea are attributed to a limited number of major incidents that have occurred during those years. Some carriers reported no lost containers while others noted significant incidents where hundreds of containers were lost in a single accident. With more than 6,000 ships around the world carrying containers at any point in time, the WSC previously distinguished catastrophic losses as 50 or more containers lost in a single incident. However, the 2020 data no longer differentiates catastrophic losses. 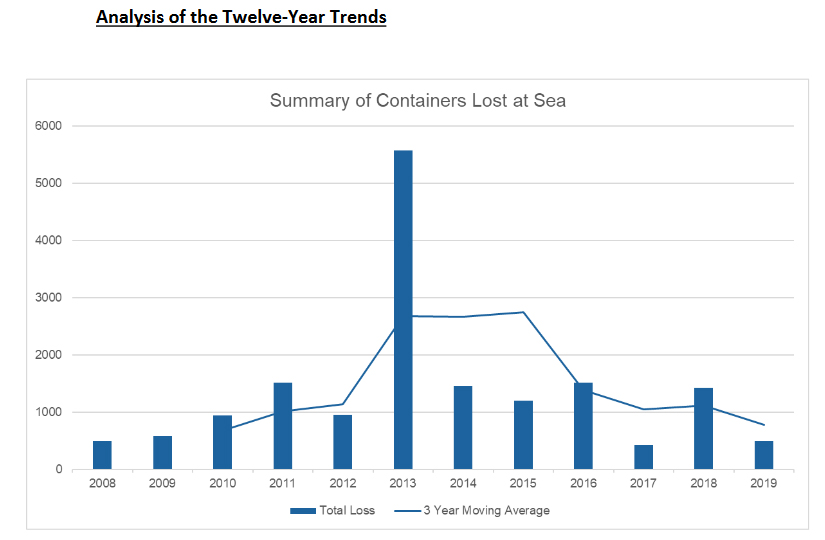 Recognizes that all containers lost at sea represent safety and environmental hazards regardless of how and when those containers were lost, the WSC points to efforts between government and other stakeholders to enhance container safety. Among these, they highlight the 2016 changes to the SOLAS convention that require verification of container weights before packed containers may be loaded aboard ships. The WSC also anticipates efforts to further revise and enhance the 2014 code of practice for packing of cargo transport units as well as future revisions to the 2015 ISO standards for container lashing equipment and corner casting.

At the same, the WSC is also participating in efforts to revise the IMO guidelines for the inspection programs for cargo transport units including containers, and is also co-sponsoring with the European Union a proposal to the IMO for mandatory reporting of containers lost at sea.

The World Shipping Council concludes the survey report saying that carriers will continue to explore and implement preventive and realistic measures to bring container losses as close to zero as possible and welcome continued cooperation from governments and other stakeholders to accomplish this goal.