07-May-2020
Ports around the world are facing a unique challenge: where to put all the cruise ships that have suspended operations due to the global pandemic. With over 280 cruise ships idled worldwide, the lines are searching for dock space to accommodate their ships. Several ports stepped forward to work with the cruise lines when they canceled cruises. PortMiami, for example, waived all lay berth fees for home-ported vessels that requested to berth alongside.  This waiver was extended for an additional 30 days through May 12, 2020, subject to availability. Some of the cruise lines used PortMiami as a staging port to load provisions and transferring crew to repatriation flights home.  Currently Norwegian Cruise Line Holdings’ ships the Norwegian Escape, Marina and Sirena are all staying on the dock while other ships come and go in PortMiami. Jaxport in Jacksonville, Florida also accommodated cruise ships at the beginning of the suspension. Four vessels, Carnival Ecstasy, Norwegian Pearl, Norwegian Sky, and Norwegian Sun, were in the port, and as Norwegian moved to put its ships in cold layup, two of its vessel – the Norwegian Gem and Norwegian Sky – were docked in Jacksonville.  Additionally, three of Norwegian’s cruise ships recently arrived at The Port of Virginia’s Portsmouth Marine Terminal where they are expected to remain with skeleton crews until the end of June 2020. 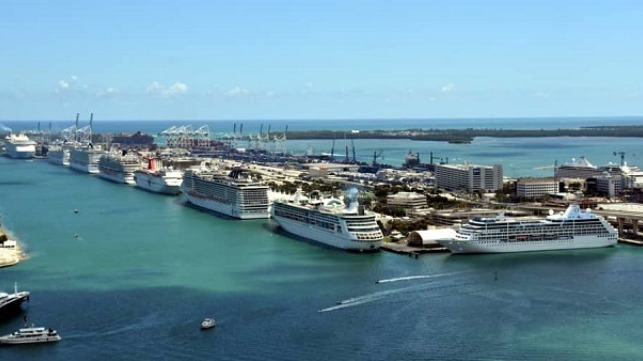 Cruise ships idled in Miami, April 2020 (image courtesy PortMiami) Complicating efforts to lay up the cruise ships were the requirements from the U.S. Coast Guard and the Centers for Disease Control and Prevention (CDC).  According to The Port of Virginia, Norwegian Cruise Line had to submit crew manifests and a plan of operation during their stay at port for review and approval by the CDC, the Coast Guard, and the Virginia Department of Health.  Similar scenes are playing out at other ports around the globe. For example, eight cruise ships from companies including AIDA Cruises and MSC Cruises have been tied up at Port Rashid in Dubai, United Arab Emirates since the beginning of the cruise suspension. In the Firth of Forth in Scotland, Fred. Olsen Cruise Lines’ Balmoral, Boudicca, Braemar, and Black Watch are all now anchored and were recently joined by two P&O Ferries vessels that normally operate on the English Channel. Some situations, however, have proven more difficult for the ports and shipping companies. Norwegian Cruise Lines Holdings had agreed to dock two vessels at The Port of Astoria, Oregon in an arrangement similar to its agreement with Virginia. However, local authorities later declined the docking.   Similarly, according to the Scottish outlet Greenock Telegraph, local authorities objected to a plan to dock up to a dozen cruise ships in Greenock. Australia also ordered all of the international cruise ships to leave its ports, with many of the ships sailing to The Philippines.  As the suspension has stretched on, cruise ships are continuing to arrive in locations that normally do not see vessels of this class. The residents of Weymouth in southern England were surprised to see P&O Cruises’ vessels Arcadia, Aurora, and Ventura all riding anchor in their bay. Recently, Cunard Line’s Queen Mary 2 also moved from her berth in Southampton, England to the Weymouth anchorage. The challenge will continue to be finding berth space able to accommodate more of the cruise ships as the lines seek to move their vessels into cold layup to reduce crewing and operating costs.