The National Transportation Safety Board has released a trove of documentary evidence and factual reporting on the deadly fire aboard the dive boat Conception on September 2, 2019. The docket‘s technical reports confirm that there was no assigned roving watch on the night of the fire, and they raise new questions about the level of safety training that the crew received before setting sail. The new material does not include any conclusions or recommendations, which will have to wait for the NTSB’s final report; that document will be released after a hearing scheduled for October 20.

In multiple witness interviews, former crewmembers told NTSB investigators that they did not recall a designated watch or roving patrol on board the Conception on prior voyages. Federal code requires that the operators of Subchapter T passenger boats (like Conception) to maintain “a suitable number of watchmen in the vicinity of cabins or staterooms and on each deck” when at anchor.

The captain of another vessel in operator Truth Aquatics’ fleet, the Vision, told NTSB that he believed that having one crewmember sleep in the same compartment as the passengers “somehow fulfilled” the federal requirement for a roving watch, because “the boat’s been operating this way for so long successfully after so many [Coast Guard] inspections that it must be fine.”

USCG marine inspectors told the Coast Guard that is difficult to supervise operators’ policies on roving watch when under way. In a records review, NTSB investigators found no indication that the Coast Guard has issued any citations for failure to post a night watch within the past three decades.

Crewmembers also told the NTSB that new hires on Conception received little training before heading out, and that most training was conducted on the job. Three of the crewmembers – the second captain, first deckhand and second galleyhand – reported that they had never participated in a fire drill aboard the vessel, and the first deckhand said that he had never “done a dry run on anything, with the exception of during the Coast Guard inspections.” Written logbook records for safety drills were maintained solely on board, according to the operator, and they did not survive the fire.

In addition, none of the crewmembers who were on board Conception the night of the fire “were aware of any posted station bill,” and the first galley hand “was unfamiliar with the concept of a station bill” when questioned by investigators, NTSB reported.

In previous communications, inspectors have hinted that they are closely looking at an electrical fire as the initial source of the blaze. In particular, the Coast Guard has directed other passenger vessel operators to carefully manage the use of extension cords, power strips and the charging of lithium ion batteries. Previous passengers aboard the Conception and other Truth Aquatics boats testified that all manner of battery-powered equipment – cameras, dive lights, underwater scooters and other paraphenalia – would be charged inside the salon or the galley each night.

In one previous incident aboard the vessel Vision,  a passenger spotted and stopped an electrical fire in the galley after hearing a “loud bang” in the early hours of the morning, A battery charger for a.generic-brand dive light had melted, burning the bookshelf it was resting on, and two passengers put the fire out. The captain was informed, but investigators found limited evidence to show that the near-miss incident was shared with the rest of the Truth Aquatics fleet, NTSB asserted. 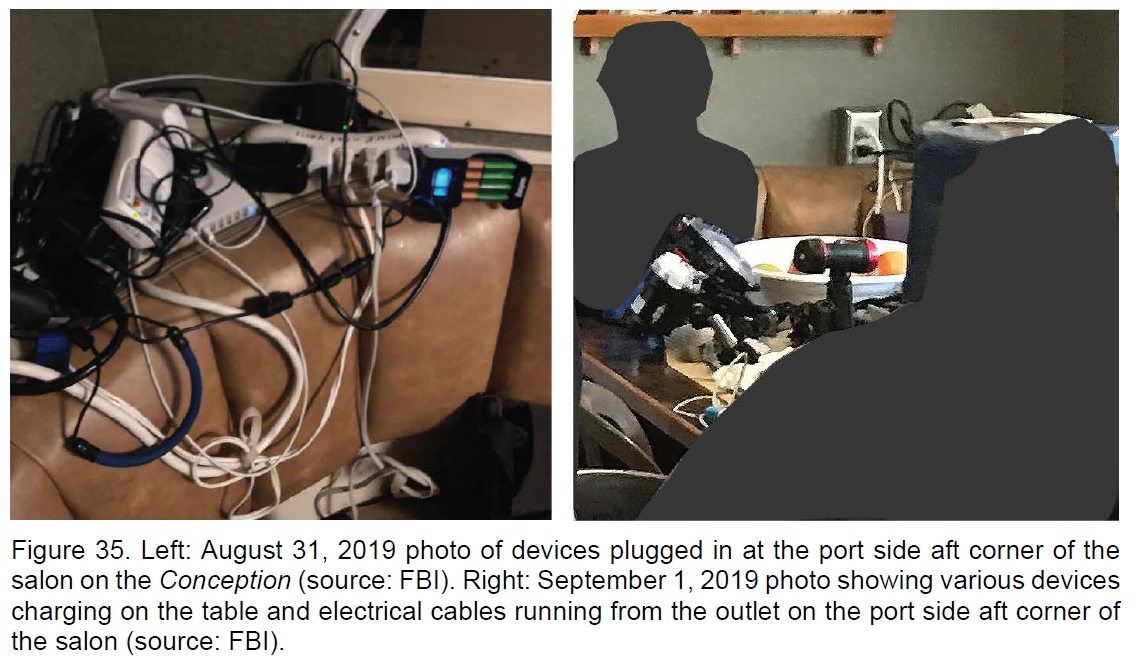