The pace of new cruise ship construction is picking up after several months of delays related to the impact of COVID-19 on shipyard operations. Recently, several new ships have been floated out of their dry docks as the shipyards work to catch up on the fitting out of the delayed ships.

Among the cruise ships floated out was the world’s largest cruise ship, named Wonder of the Seas by Royal Caribbean International. On September 5, the ship which is expected 228,000 gross tons with accommodations for up to 6,680 passengers and 2,200 crew, was floated out of its dry dock at the Chantiers de l’Atlantique shipyard in Saint-Nazaire, France. It will be the fifth Oasis-class cruise ship to be built for Royal Caribbean.

Assembly of the Wonder of the Seas began in October 2019 with its first blocks being placed in the dry dock. At the time, Royal Caribbean said the ship would enter service in 2021 becoming the first of this the largest class of cruise ships to be homeported in Shanghai, China. It was seen as an important strategic move from the line that had been cruising from China for a decade and as a strong signal of confidence in the Chinese market. Before the pandemic, cruise lines had already been repositioning cruise ships away from China with many analysts believing that the Chinese market was proving more difficult to develop and not sustaining its rapid growth rate.

Royal Caribbean has not provided updated details on its plans for this cruise ship. Rumors have circulated in the cruise industry that the ship’s arrival in the Chinese market might be postponed. At this point, Royal Caribbean has only confirmed that the introduction of the ship is postponed till 2022 due to construction delays related to the interruptions earlier this year as the shipyard paused work during the COVID-19 outbreak in France. 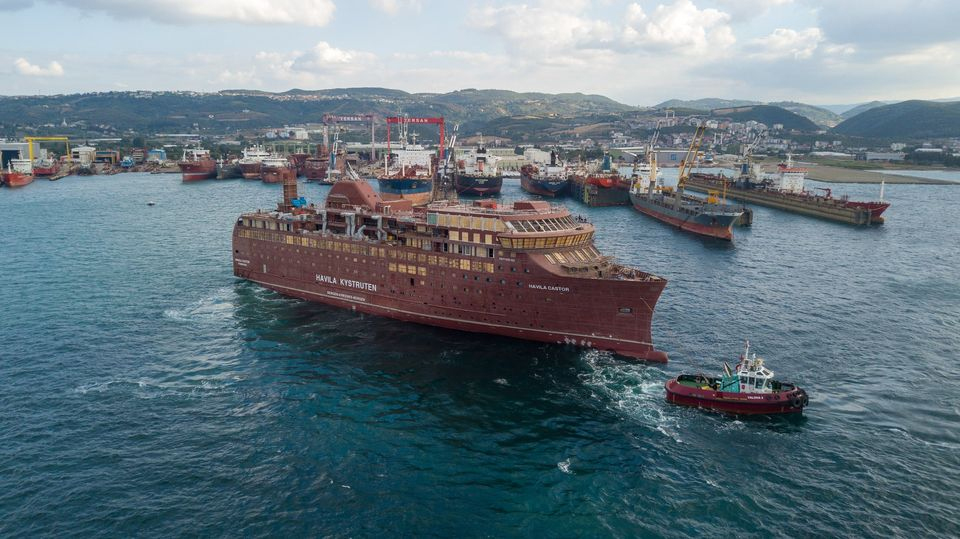 The day after the festivities in France, two new cruise ships were also floated out at the Tersan shipyard in Turkey on September 6. A fraction of the size of the Wonder of the Seas, these two new ships, named Havila Castor and Havila Capella are being built for the Norwegian coastal shipping market. Havila is building four 15,500 gross ton cruise ships as part of its contract with the Norwegian government to run a portion of the costal service in competition to long-time operator Hurtigruten.

The four ships being built for Havila are among the most technologically advanced cruise ships under construction, in part to meet Norwegian requirements for environmentally friendly operations that reduce emissions. Designed to sail between Bergen and Kirkenes, Norway, the ships will be fueled with LNG and also will be fitted with the world’s largest battery packs that can power the ships for up to four hours of continuous operation. They are also designed to use shore power in port and have systems for heat recovery from the sea and cooling water.

The launching of these two ships was delayed by COVID-19, but the Turkish shipyard proceeded with fitting out continuing to make progress with plumbing, machinery, electricity, and fixtures, and fittings according to Havila. However, the ships will not make their originally anticipated delivery for the first of the year so that Havila can commence service as per its agreement with the Norwegian government. They currently anticipate that these two ships could be delivered during the first quarter of 2021.

Havila noted that the current travel restrictions related to COVID-19 are making it difficult to be specific about its plans for 2021. The company received permission from the Norwegian authorities to use two substitute vessels to commence service, but they note that they are currently in discussions about the anticipated demand for the coastal route at the beginning of 2021. Havila’s contract ultimately calls for four ships to be in service on the route. 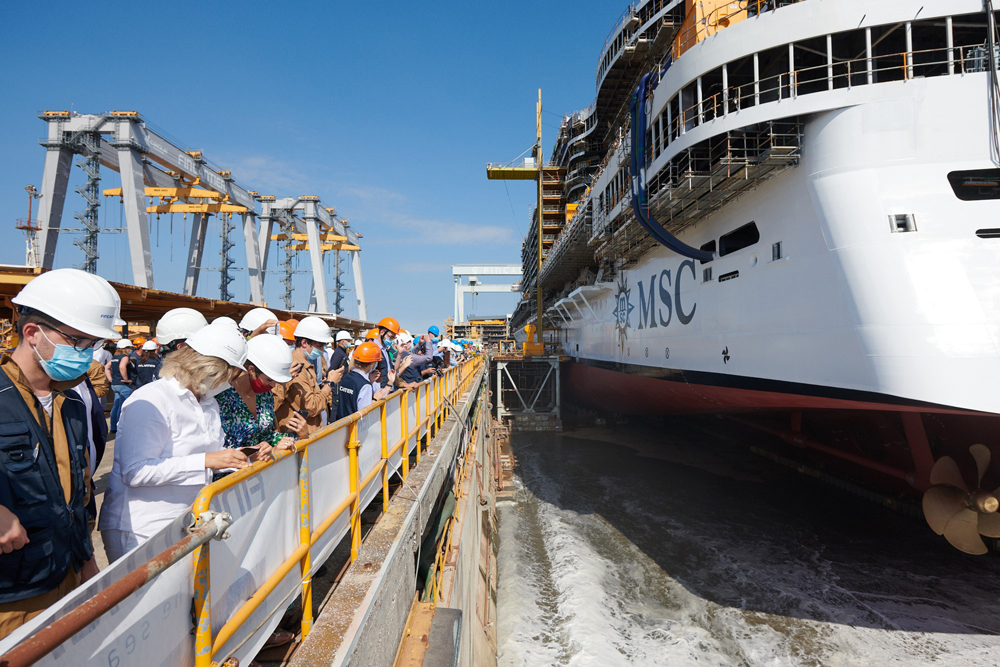 These two float outs came a little more than two weeks after Fincantieri launched its newest cruise ship for MSC Cruises. The MSC Seashore was floated out at the Fincantieri shipyard in Monfalcone, Italy on August 20. At 169,500 gross tons and a maximum capacity of 5,877 guests, this is an enlarged version of the company’s Seaside cruise ships. With a length of 1,112 feet, it will also be MSC’s longest cruise ship and the largest ever built in Italy.

Fincantieri and MSC have also incorporated several new design elements into this cruise ship. It is 52 feet longer than the first two cruise ships of the class with new passenger amenities and accommodations and featuring including a new double-decker aft lounge. The ship is also fitted with advanced systems to reduce emissions, treat wastewater, and use shore power. The MSC Seashore is currently scheduled to be delivered in July 2021 and start cruising in the Mediterranean.