Reflecting the growth both in the size of wind farm installations and the development of larger turbines, the Knud E. Hansen naval architecture firm presented a design for a monster of a vessel able to tackle the challenges of larger installations. Hansen believes that the growth in the offshore wind sector creates more opportunities for specialized vessels.

The design for a 14,000 dwt vessel is tailored for cost-effective installation of large-scale wind farms and can be customized to the operators’ needs. Anticipating the trend toward larger and heavier wind turbines, Hansen designed the Atlas A-class to be able to carry four new-generation 14 megawatt wind turbines. Siemens Gamesa, for example, is promoting its design for a 14 MW turbine saying the offshore giant features a low nacelle weight of just 500 metric tons.

The Hansen vessel is specifically dimensioned for transporting and assembling wind turbines on top of pre-installed foundations. The foundations, which are heavy but do not require jacking, can be efficiently installed from a heavy-lift vessel. As a result, the Atlas A-class can be entirely optimized for the jacking operation, with a 1600-2500 tons crane and minimal system weight for the jacking equipment. 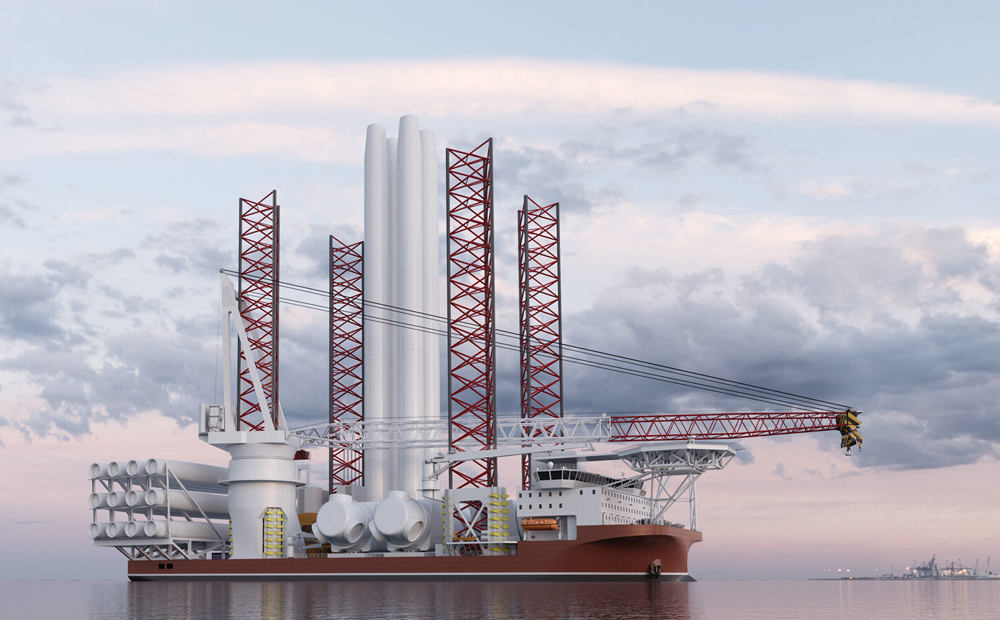 The design calls for powering the vessel with eight generators connected to a DC grid and a battery pack, allowing the engines to run at variable speed for fuel efficiency while also utilizing load leveling and peak shaving. The batteries would not only provide instant power, avoiding unnecessary spinning reserve power from the generators but also make it possible to recover approximately 60 percent of the energy used for jacking, when the jacking units are reversed on the way down. Furthermore, the high-speed electrical rack-and-pinion jacking system is designed for 5,000 load cycles, ensuring that the legs and components will withstand wear throughout the life of the vessel, avoiding costly and resource-heavy replacements along the way.

The A-class design is also customizable by selecting cranes, thrusters, generators, and jacking systems according to the specific requirements of the client, as well as availability from the manufacturers.

Accommodations aboard the vessel would include on the main deck of the accommodation block an operations center consisting of offices and meeting rooms as well as a hospital, day room, TV room, change room, and workshop. Above this is a large galley with provision rooms.

The three decks above include a total of 114 cabins for contractors, crew, and officers. The top deck consists of a bridge with center and wing consoles and a large helicopter deck. Below the main deck is a gymnasium, cinema, TV room, games room, and sauna as well as a laundry room and storerooms.