Firefighting efforts by the combined teams from India and Sri Lanka, along with the support of the salvage team, appear to be gaining the upper hand on the fire aboard the VLCC New Diamond drifting in the ocean near Sri Lanka. The relentless pumping of water on the vessel to control the fire however appears to have caused new challenges for the teams and concerns for the vessel.

The most recent pictures released from the scene show the vessel down at the stern creating a condition the Sri Lanka Navy referred to as ‘trim by aft.’ The Navy is attributing this to the sheer volume of water that has been pumped onto the ship that is believed to have flooded the engine room compartment.

Observations in the area around the New Diamond today detected a small patch of oil approximately one kilometer away from the vessel. The teams on site are speculating that diesel fuel from the engine room has mixed with the water in the compartment and leaked overboard causing the oil patch. They believe that some of the ship’s fuel tanks may have ruptured leaking oil into the engine room, but they report that there are no signs that the two-million-barrel crude oil cargo is currently in danger of leaking. 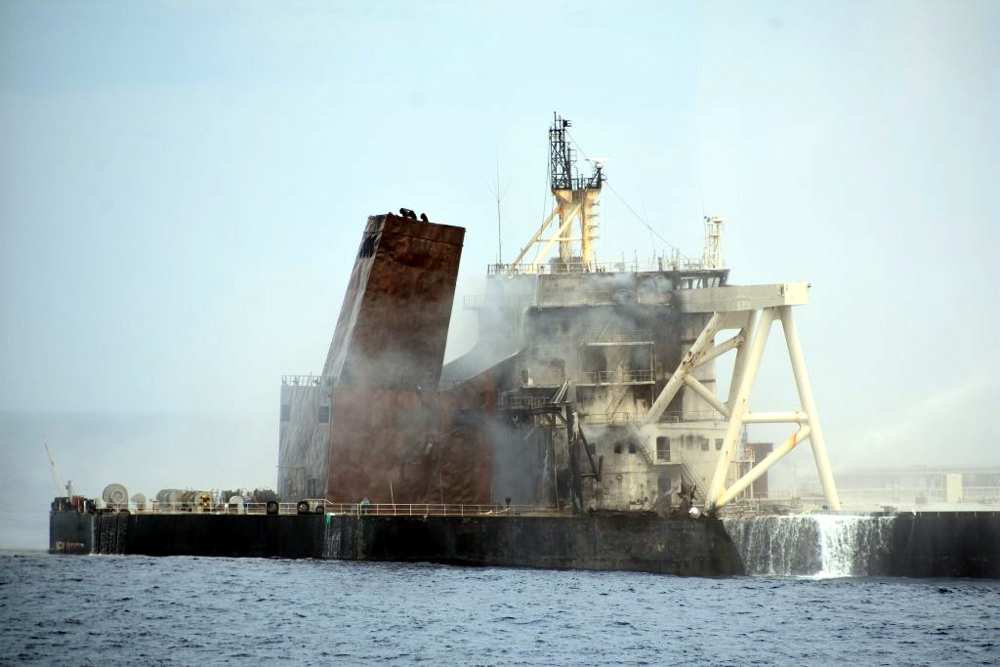 A research team was sent to the site and they took water samples to determine the extent of the oil leak and potential damage to the environment. In addition, a Dornier aircraft from the Indian Coast Guard flew over the oil patch detected in the ocean and applied dispersant that according to the authorities will, “change the chemical composition of the diesel mixed with seawater, thereby minimizing the potential impact on the marine environment.”

A combined team consisting of nine ships from India and Sri Lanka and five tugboats remain on site fighting the fire along with the aircraft support. They continued to put water on the tanker to cool the vessel and repeated the application of dry powder to suffocate the fire. As a result, as of this evening, they reported that the fire was contained and greatly reduced. They continue to coordinate with the salvage teams hired by the tanker’s owners to develop a plan for the next phase of the operation.

The Sri Lanka Navy also arranged to transfer 20 of the crew members to shore today. They are being accommodated in an isolation center due to COVID-19 concerns while a plan for their repatriation is completed. The captain of the New Diamond remains on the scene with the firefighting crew assisting with the operation.