Five years after Canada ordered its new generation of new Arctic and Offshore Patrol Ship (AOPS), the first of the vessels built for the Royal Canadian Navy under the National Shipbuilding Strategy was delivered. Her Majesty’s Canadian Ship (HMCS) Harry DeWolf is the most modern and at 6,615 tons, the largest vessel ever built in Canada in a combat package. It is also the largest Navy vessel built in Canada in more than 50 years.

Named in honor of Vice-Admiral Harry DeWolf, a Canadian wartime naval hero, the ship is the first of six Arctic and Offshore Patrol Vessels specifically designed to patrol Canada’s offshore waters and northernmost regions. The class enhances the Canadian Armed Forces (CAF) Arctic presence, enhancing the RCN’s reconnaissance and surveillance activities. In addition to highly versatile platforms that will enable the ship to support a variety of domestic and international missions, its modern accommodations and facilities will improve the comfort and quality of life for its crew.

Among the features of the design, the AOPS can operate in up to 120 cm of first-year sea ice and will be able to accommodate a Cyclone helicopter as well as small vehicles, deployable boats, and cargo containers. This will enable the RCN to have unescorted access to areas of the Arctic that were previously inaccessible. To support this work is ongoing to complete the Nanisivik Naval Facility, which will provide a base for new AOPS and other government maritime vessels. This new facility is expected to be completed in 2022. 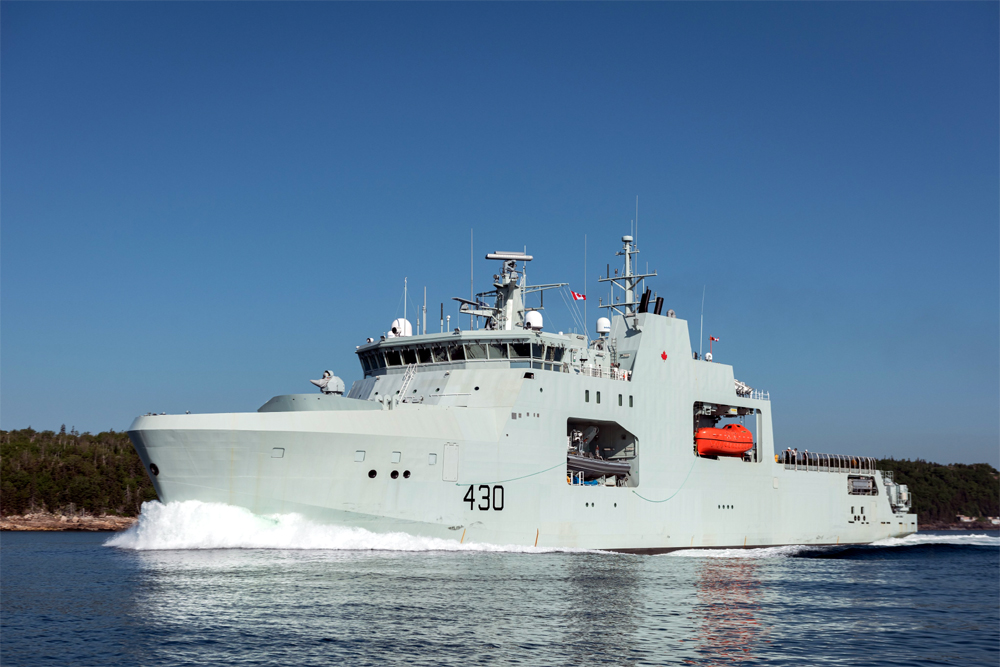 The vessel was moved this morning from Halifax Shipyard to the CFB Halifax Dockyard, where it will be based. An official Acceptance Ceremony was held on the Dockyard NJ Jetty, where ownership of the vessel was signed over to Canada and the Royal Canadian Navy. During the handover ceremony, the ship’s company marched on board to assume command of the vessel.

HMCS Harry DeWolf was launched on September 8, 2018. She completed builder’s trials at sea in November 2019 and her acceptance trials earlier this month. She will remain in Halifax while the RCN conducts its post-acceptance trials and training, including operations near Newfoundland and Labrador. Once this post-acceptance work is complete, the ship will undergo a formal commissioning ceremony in the summer of 2021.

The next three vessels of the class are already under construction. The future HMCS Margaret Brooke was launched in November 2019 and continues construction in the water at Halifax Shipyard. The future HMCS Max Bernays is in the assembly hall at Halifax Shipyard preparing for a move to land later this year, while the future HMCS William Hall entered the assembly hall last November and will soon have a keel laying. Construction of the fifth and sixth ships is expected to begin in 2021 and 2022. Two variants of the AOPS are also going to be built for the Canadian Coast Guard. Construction of the seventh and eighth ships is expected to begin in 2022 and 2023. 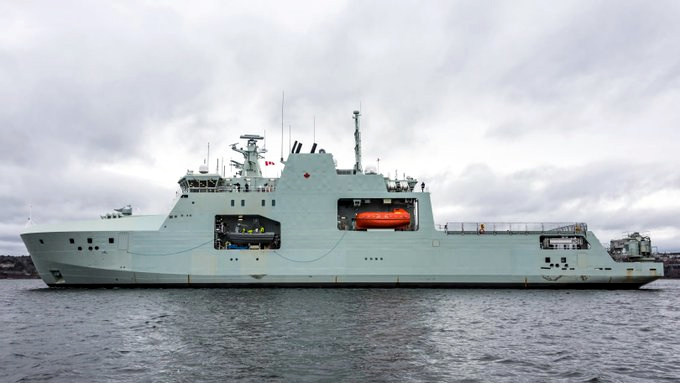 Characteristics of the vessels include: