European Ports Continue to Adopt Shore Power for Marine Use

Challenged to meet increasing environmental concerns and address the emissions levels from ships on dock, a growing number of ports are exploring or expanding shore power alternatives. While supporters believe that shore-to-ship power holds the potential to virtually eliminate ship emissions in ports, critics point to the lack of infrastructure investment, government support, and the potential of simply transferring the environmental impact from ship to shore as the power must still be created.

Ports in Europe and North America have been among the leaders in the technology known as cold ironing. The trend continues to gain momentum at ports ranging in size from the largest to regional ports in especially environmentally sensitive locations. Two additional European ports recently announced plans to proceed with shore power projects.

The Senate in Bremen, Germany recently resolved to create comprehensive additional shore power supply facilities at the ports of Bremen. The plan calls for eight shore power supply units for maritime shipping and two additional connections for inland shipping. Under this plan, by the end of 2023, two shore power supply units will be installed for maritime shipping in the container throughput area in the city of Bremen, another one in the ro-ro port area, and one at the cruise terminal. At Fischereihafen in Bremerhaven, there will be three facilities for government vessels and one for research shipping.

Bremen’s current shore power capabilities are focused mostly on the port and service vessels as well as inland. Two additional facilities for inland shipping at Bremen’s Industriehafen will be added under the new plan so that all the relevant mooring points for river traffic will be equipped with shore power connections.

“The creation of shore power connections for maritime shipping is another step forward and an important milestone in our endeavors to become a green, climate-neutral port,” said Dr. Claudia Schilling, Senator for Science and Ports. “Accordingly, the electricity for these permanently installed shore power connections will come entirely from renewable energy sources.”

The total investments for all ten new connections will amount to 32.4 million euros, half of which will be funded by the Federal Land of Bremen, the other half by the federal government with an administrative agreement to be signed between the federal and state governments.

Calling for ship owners to design and operate more eco-friendly fleets, the senator said, “We can only achieve our goal of clean shipping if everyone involved makes a concerted effort. The more ports that provide shore power, the more cost-effective it will be for the shipping companies to adapt their vessels.” 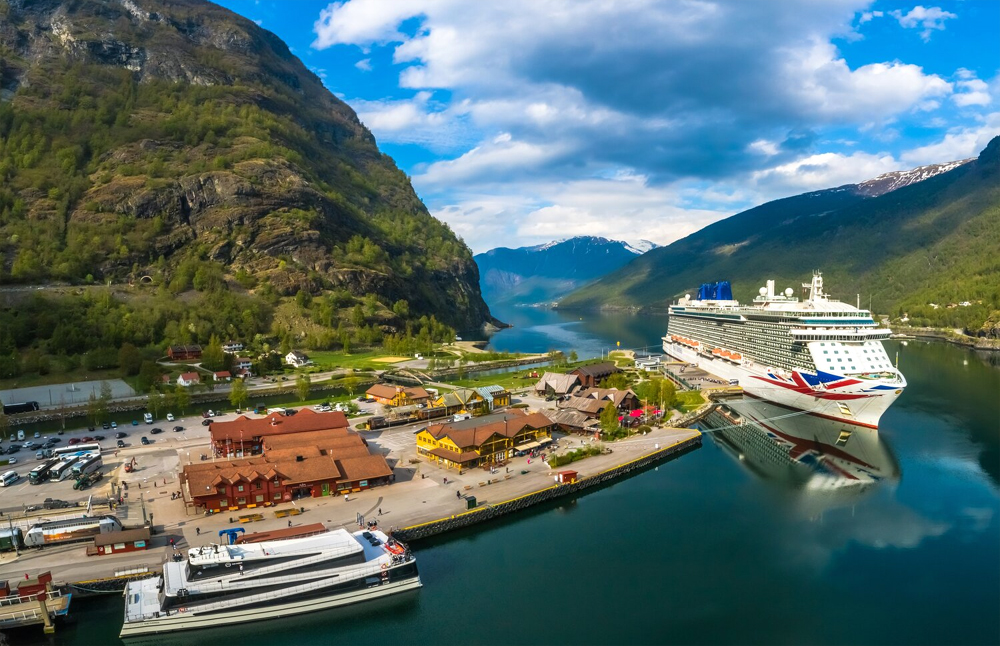 The pristine environment in port of Flam, Norway

Enova SF, owned by Norway’s Ministry of Climate and Environment, recently agreed to provide a third of the cost for a project that includes an underwater cable directly from the hydropower station in Aurland to Flåm. This cable will accommodate future demands and open for development and innovation.

“This was big and important news for us,” said Tor Mikkel Tokvam, Port Director for Port of Flåm. “This shows that we are ready for a changeover. Now we need to find a balance when it comes to the OPS facility and the opportunities it gives us.”

The port director highlights that the project aligns with the regulations for the World Heritage Fjords set by the Norwegian Maritime Authority and the Norwegian Parliaments, which seeks to make the world heritage fjords emission-free in 2026

The port estimates by establishing its OPS facility, that emissions from cruise ships will be reduced by 75 percent while also contributing to Flam’s overall supply of electricity.